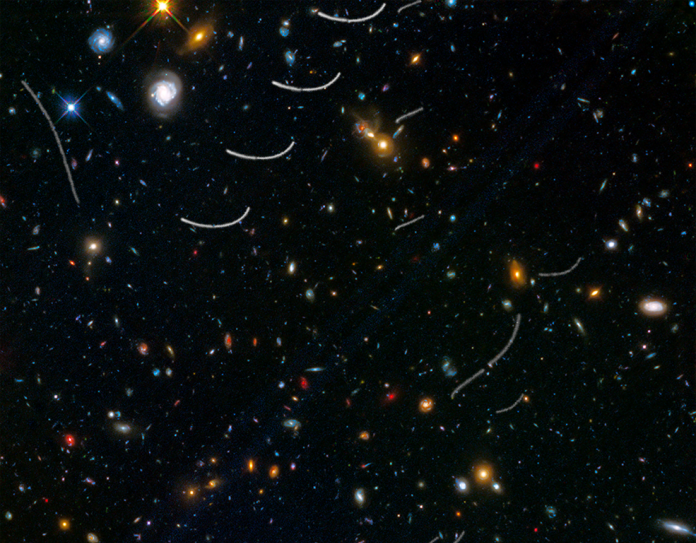 Like playful relatives who decisively hop in front of your vacation snapshots of landscapes, some of the asteroids in our solar system have also photobombed images of the distant galaxy cluster.

The Hubble telescope was eyeing at Abell 370. This cluster is a bunch of hundred galaxies linked together by gravity and located 4 billion light-years away. As the telescope was looking at it, seven faint asteroids came across the field of view. Five of them were never seen before.

Collective Hubble exposures are usually combined into one image, so the asteroids appear in 20 separate sightings.

“The asteroid trails look curved due to an observational effect called parallax. As Hubble orbits around Earth, an asteroid will appear to move along an arc concerning the vastly more distant background stars and galaxies,” explained the Space Telescope Science Institute (STScI). The institute manages Hubble observations.

STSci official explained that the Parallax effect is somehow similar to the what you see from a moving car. The trees along the road look like they’re passing by more quickly than background objects at the much larger distance.

“The motion of Earth around the sun and the motion of the asteroids along their orbits are other contributing factors to the apparent skewing of asteroid paths,” the STScI officials added.

All the asteroids were found manually. The majority of them are by ‘blinking’ continuous exposures to capture apparent asteroid motion. For every 10 to 20 hours of exposure time, astronomers found a unique asteroid.

The STScI officials explained that the picture was assembled from images taken in a visible and infrared light. The reason why Hubble astronomers saw many crossings was that ‘the field’s position on the sky is near the ecliptic, the plane of our solar system. This is the zone in which most asteroids reside.’

“Hubble deep-sky observations taken along a line-of-sight near the plane of our solar system commonly record asteroid trails,” the STScI officials explained.