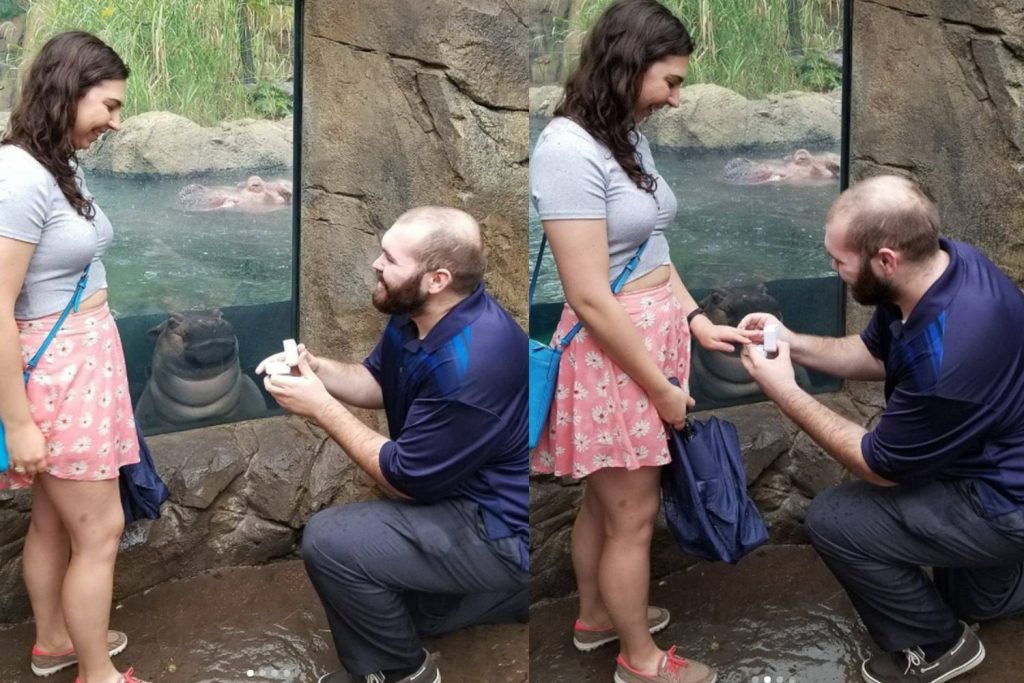 You probably have seen different engagement proposals from various social media sites. Perhaps you came up with this idea of how you want your ‘future’ engagement will be.

What does it take to have a successful and romantic proposal? Well, to be honest, no one else knows except you. Because you know better about your partner and you know the right thing to do.

However, some couples do a little extra preparation for this memorable moment. If you’re running out of ideas, you have to check this very simple yet charming proposal.

The couple – Nick Kelbe and Hayley Roll – have been avid fans of Fiona the Hippo since the day she was born.

Fiona isn’t just adorable. She’s also a very special hippo. After 75 years, she was the first ever Nile hippo born at the Cincinnati Zoo. When Fiona was born, she was six weeks premature. Although she was in a critical condition, she fought and survived.

The zookeepers refer her as “little hippo with big personality”. Weighing just about 29lbs, Fiona is the smallest hippo ever born alive.

Last October 8, the couple decided to visit Fiona at the Cincinnati Zoo in Ohio.

According to Hayley, they agreed to celebrate their first year anniversary at the zoo. But it turned out to be more than just a celebration.

Everyone was clueless about Nick’s engagement proposal. She thought it was just a regular visit for Fiona as part of their anniversary celebration.

The couple patiently waited for their turn for the picture taking. Hayley asked someone to take the photo of them. But as she turned around to her boyfriend’s direction, Nick was already on his knees holding the engagement ring.

However, Fiona acted as if she knew it was going to happen. She was caught right in the act and made the photo even more priceless.

Nick and Hayley didn’t expect that the outcome of the photos went well. What made them happier was that Fiona was part of that very special moment.

Now, Fiona isn’t just a hippo at the zoo, but a witness to Nick and Hayley’s great love for each other.