Jimmy’s Jar of Pickles Photobombs Live with Kelly and Ryan

We’ve seen people and animals becoming famous for their epic photobombs. This time, we caught an eye of a jar of pickles stealing the show.

“Jimmy Fallon has taken the pickling!” says Kelly Ripa, host of the Live with Kelly and Ryan show.

Is Jimmy’s pickle jar a ‘jar of pickles’ on the Live with Kelly and Ryan show?Of course not! It’s presence actually give an accent to their studio decoration.

Ryan Seacrest wanted to eat these pickles, but Kelly opposed and said, “we cannot eat them because this is archival material. This is going on the shelf next to the Emmy, because we now have a Emmy and a pickle jar!”

Fallon assumed that Ripa and Seacrest ate the pickles after he gave it to them. But when he watched an episode with Blake Lively as their guest, he noticed that something had stolen the limelight – yep!it’s his jar of pickles.

Ripa also said that they were decorating for Halloween and their staff decorated around the jar of pickles. 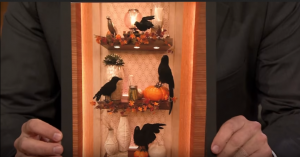 This jar of pickles surely gave such life to their show.

Yes, he did it! Fallon’s so proud of his jar of spicy pickles. Ripa even suggested that they manufacture t-shirt that says ‘home of the Jimmy Fallon pickles.’

Check this video out for the full coverage of this Jimmy Fallon episode with Kelly Ripa.