It’s not everyday a rock star happens to be in the same place as you. That would be a field day. Well, for kids Joe Quinlan and twins Alex and Nick Yiakoumatos, they got the best experience during their photoshoot. While rocking with their rock and roll attire for a particular mompreneur boutique in Long Island, one famous rock star decided to photobomb their photoshoot.

Cut the chase, who on earth is this rock star? No other than Jon Bon Jovi. Yes, the legend himself.

Wait, who? Well, for kids who weren’t born during the rock and roll era. That’s from 1984 to 2007. Jon Bon Jovi was famous and was a legendary rock star of this period. He sang the songs Living on a Prayer, It’s my Life, You Give Love a Bad Name, Bed of Roses and Bad Medicine. At one point, your mom or grandma might have a major crush on him.

Sabrina Drazic, co-founder, and owner of Kamari Kids did a photoshoot in the area. They were doing a fall and winter Look Book with rock and roll inspired clothing. One of the adults in the group took a walk and noticed that Jon Bon Jovi was in a bookstore around the corner. She then approached the rock star and explained the photoshoot quickly. Sabrina asked him if he could join them. He immediately said, “Yes!”

So, here’s the result of that. 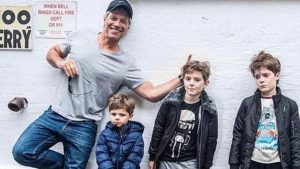 The two other kids didn’t seem pleased in the picture. That might look like it, but the kids were too starstruck seeing Bon Jovi in the flesh. Well, who can blame them? So, they decided to be extra playful.

Behind the scenes, the adults did the work and ended quickly. They couldn’t concentrate, they say. Well, who could when a rock star just literally rocked their world.

What do you think of this awesome photobomb? Yay or nay?