NASA’s Curiosity Mars rover boasts its usual selfie, but this time another interstellar body enters the picture. Can you blame the odds? The Mount Sharp has been standing all along on the surface of Mars, and now it’s tagged as a ‘photobomber’ in this one in a million cosmic snapshot.

The vehicle was on Vera Rubin Ridge as it has been investigating this part of Mars for the past several months. Directly behind NASA’s Curiosity Mars rover is the start of a clay-rich slope. The scientist is dying to begin exploring this region. In the coming weeks, Curiosity is scheduled to climb the slope. 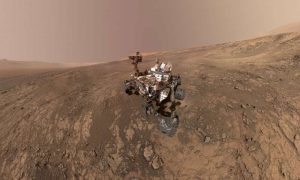 In the image, the west is on the right, and the north is on the left. The Gale Crater’s rim sits on the horizon of the edges.

Curiosity kissed the surface of Mars five years ago. Since then, the lower part of Mount Sharp has been the subject of the study.

The rover will remain on the portion of Mount Sharp for the rest of its stay on the Red Planet.

The unmanned explorer must study the geology of Mars, and the spotlight is on Mount Sharp. The aim is to locate areas where there might be a chance that may support microbial life.

The mountain base lets the rover access various layers of the Red planet formed over millions of years. With the presence of water, the Gale Crater has been thought to develop due to a lake or lakes where sediments accumulated.

The cosmic photobombing snapshot or technically called ‘mosaic’ was made from various images taken by Curiosity’s Mars Hand Lens Imager or MAHLI. The shots were all taken on Jan. 23, 2018, during Sol 1943.