When the astral bodies collide to make something epic, we’re in for a big surprise. They have a unique way of photobombing their way to our hearts too. I guess we can all agree that our inner nerds would always love to see a special kind of astral collisions, one that doesn’t involve in destruction. Anyway, with that being said, let’s talk about Saturn and Phobos (Mars’ moon).

Before we even proceed to the real event, let’s have a quick review of our solar system. Phobos is one of Mars moons. Saturn is one planet away from Mars. Their total distance is roughly 1 billion km away from each other.

So, the chance of a photobomb is a rare occurrence. However, we must thank our lucky stars because the astral world has given us another opportunity to have a look at their wonders and peculiarity.

For this one, we’ll be featuring the planet Saturn photobombing the Martian moon Phobos. These photos are in courtesy of ESA’s Mars Express probe. Here’s a sample photo.

Although the express has learned about the moon’s size, appearance and position, still their composition, how and where they formed, and what their surface conditions are like remains unknown. Making the long story short, the probe is on a mission to conduct regular flybys of these moons and take pictures of them. Then, this is where the awesome photobomb happened. Are you ready for the best one yet? Here it goes. 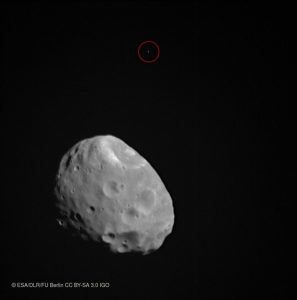 ESA/DLR/FU Berlin recently released a video which is a combination of 30 images that shows Phobos passing through the frame of their flybys. As Phobos keeps on passing by the frame, there we can see Saturn in the background and is visible as a small ringed dot.

The showing of Saturn was an unexpected turn. Since Mars Express usually use stars and other bodies in the Solar System as background references to confirm the position of the moons in the sky.

The photos of the moons were considered as special not because for their primary focus, but also the space behind them was valuable as well. That includes the photobombing planet Saturn.

The photobombing incident gave scientists another idea on the moons of Mars and its behavior. While they’re learning more about Mars, they’re also learning the planets that surround them.

This incident also gave out more precise measurements of the moons’ positions. Making it easier to study the moons further, because it only takes a few moments for a spacecraft to line up a shot and take it.

So what can you say about this wonderful collision between Phobos and Saturn? What we thought could be a fascinating encounter made an educational turn. The scientists from European Space Agency is still on the watch so that we can expect some other extraordinary photobombs in the future.