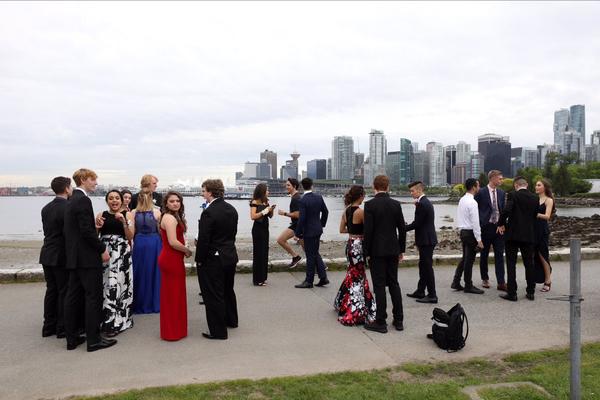 What makes prom nights fun and memorable? It’s the partying and the awkward moments. There are the prom kings and queens that also highlight the celebration. But what if the leader of the country takes the high spot of the event?

Canadian president Justin Trudeau pulls out a momentous pose on a bunch of high school students while out for a jog at Stanley Park, Vancouver.

The 45-year-old Canadian president photobombs school prom youngsters who were at first seemingly unaware of his presence.

The students, dressed up in finery for the occasion were startled about seeing Mr. Trudeau running past them.

Constantine Maragos, who was present during that fun moment said that they’re just taking photos, hanging around, and talking when Mr. Trudeau suddenly came jogging their way.

“At first, we were like, ‘Why is the prime minister of Canada running the seawall?’ And then we started yelling for Trudeau to get in the photo,” said Maragos. Credits given to Adam Scotti, Mr. Trudeau’s official photographer, who tweeted the captured moment with the caption: “Prom season in #Vancouver.”

This isn’t the first time Mr. Trudeau photobombed an event. The random moment was fun and sure gave a noteworthy memory for the high school grads. It’s astonishing that the Canadian president can freely jog outside without some crazy protective escorts. Wearing a shirt, shorts, running shoes and a pair of headphones while running along the seawall isn’t a common sight for someone in a prominent position.

Can your prom memories go even more exciting and remarkable than this fun epic photo?