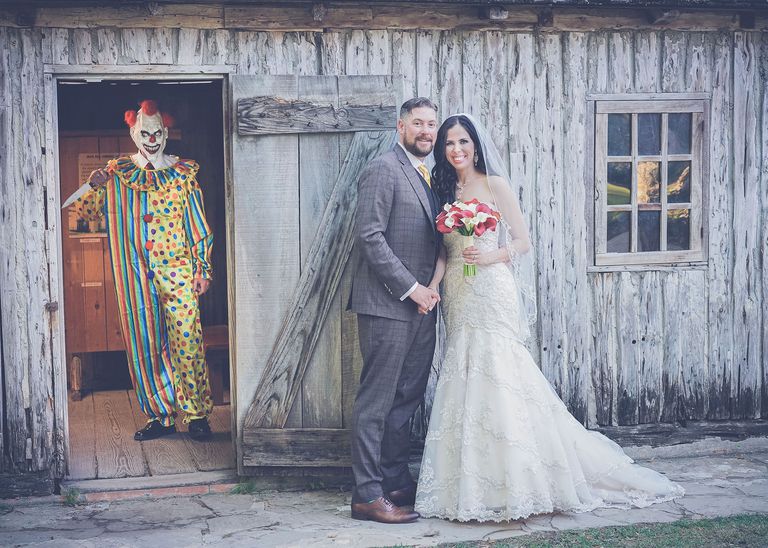 Wedding anniversaries are one of the milestones in marriage. Romantic ways to celebrate this event is usual for most couples. There are the flowers and the candlelit dinners. Others may receive unique gifts on that day.

One couple made a different approach to remembering their wedding anniversary. Vincent Alexander prepared a gift for his wife, and it was quite romantic and funny.

The husband planned his idea with his photographer, Megan Bowling of Pop of Color Images. He wanted a photo with a clown on the background for the wedding photo with his wife. His brother dressed up as a clown, holding a knife. The photography team pulled the stunt impressively as they have painted a picture full of irony. A scary clown in a happy wedding photo? Whoa.

His wife, Amanda, has no idea that her husband has been keeping a hilarious yet romantic secret for the first year of their marriage.

“After a year of keeping a secret, she finally opened her anniversary gift. I am shocked she never found out,” Vincent wrote in a Facebook post. “The pressure is finally off. Happy anniversary sweetheart, I love you to death.”

There’s also a video of Amanda, opening her husband’s anniversary gift. Her reaction pays off the effort of the surprise.

“Clown or no clown I thought it was the sweetest,” Bowling responded. “I love how passionate Vince was about the whole thing. It shows how much he knows and loves you. He made it happen I just snapped the photo and tried not to laugh.” ?

If you’re wondering how the rest of their wedding photos turned out, you may check them out below. 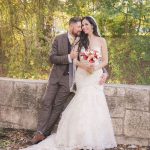 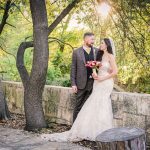 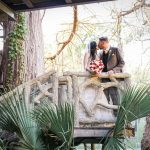 There are tons of anniversary gift ideas around. If you’re thinking about having a surprise for your loved one, know that it doesn’t to be all cheesy-romantic. The surprise can also be funny and scary and of course, with a dash of love. It’s the thought that counts after all.